Dinosaurs in the desert 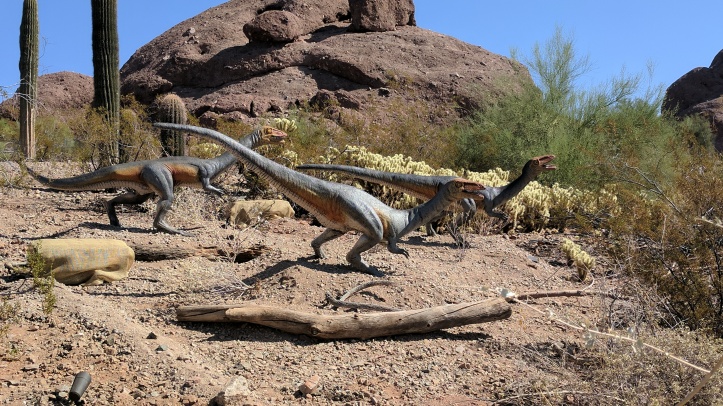 Two of my sons had yesterday off, which coincided with the Phoenix Zoo’s member-exclusive grand opening of its Dinosaurs in the Desert exhibit, so we invited a friend and made a playdate out of it.

The self-guided exhibit features 23 prehistoric creatures along the zoo’s Desert Lives Trail. It’s been many years since we’ve taken that trail and I overheard some other people saying the same thing, so the exhibit makes good use of its space.

The exhibit officially opened today and is considered a special exhibit that costs $4 for members and $5 for nonmembers in addition to the cost of zoo admission (similar to the Stingray Bay and the Giraffe Encounter). 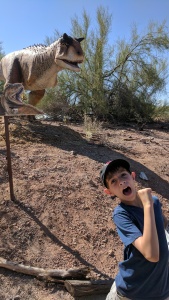 Here’s some information about the exhibit, from the zoo’s website:

“The 23 prehistoric creatures were designed by Billings Productions/The Dinosaur Company. They specialize in bringing the prehistoric past back to life. The company was founded in 2003 by Larry and Sandra Billings and today has an average of 20 events at locations all over the world. Their “collection” includes more than 350 creatures in a 67,000-square foot production shop. They’ve also partnered with more than 65 scientific organizations across the globe.”

The Phoenix Zoo is the first zoo to feature a dinosaur exhibit in a desert setting! But what really makes our experience different is how we tied the prehistoric creatures to our conservation efforts. Arizona is home to many magnificent animals with beautiful colors and patterns. We have let these animals inspire the look of the dinosaurs in our Dinosaurs in the Desert exhibit! 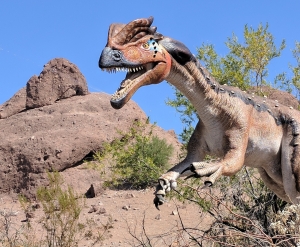 According to the zoo website, fossils from one of the dinosaurs – the Dilophosaurus – have been found in Arizona and is frequently referred to as the Arizona state dinosaur. The venon they spit (aka water in this case), provided an extra thrill for the kids. (Though according to the zoo, the spitting was made popular in “Jurassic Park” but they didn’t actually spit.)