Committed to the future of Jewish life

One thing that struck me about the recent Jewish Federations of North America’s General Assembly was how many people are dedicated to ensure the future of Jewish life.

About 3,000 people attended the GA, held Nov. 12-14, 2017 at the JW Marriott in downtown Los Angeles, with 24 people, including myself, from Phoenix’s Jewish community – the largest Phoenix delegation to attend the GA ever, according to local federation records. I wrote about it in this week’s Phoenix Jewish News, “JFNA General Assembly spotlights community diversity,” but my reflections exceed the 600-word count set for the print space, so I thought I’d expand here.

Before I get started, I want to express gratitude to all of those volunteers and staff who have dedicated so much time and effort to supporting and strengthening the local and  global Jewish community. The exhibits lining the halls outside the plenary and session rooms were only a small sample of all the organizations and programs in motion to reach all the different segments of the Jewish community: youth, college students, Millennials, young professionals, Israelis, the elderly, the Russian-speaking community, interfaith, the LGBTQ community, those facing medical challenges, veterans, Ethiopians.

Each GA participant’s experience is unique, based on the sessions they attend, exhibits they visit and their own worldview, so this post reflects only my perception. I also participated in the American Jewish Press Association’s annual conference, which was held in the same building and overlapped some of the GA sessions, so that added another dimension to my time in Los Angeles. Over a week later, here are some elements that stuck in my mind, in no particular order: 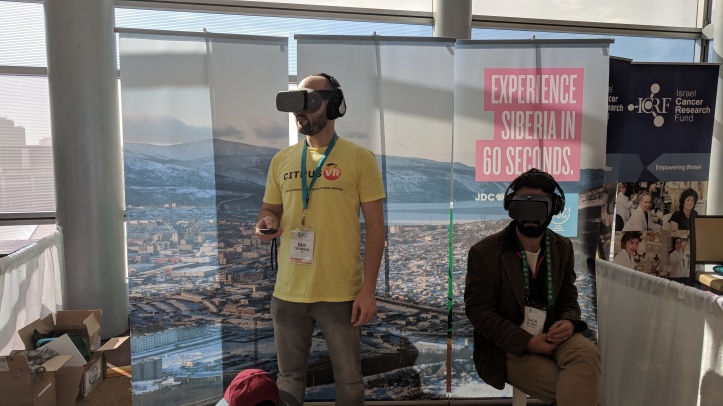 The Joint Distribution Committee (JDC) exhibit offered visitors a virtual reality trip to Siberia to visit the home of an elderly Jewish woman. Sitting on a stool that spins all the way around, you put on virtual reality glasses and a set of headphones and once the video starts, you are transported to to the icy landscape of Siberia. Spinning on the stool, you see views in all directions. It’s mind-boggling to realize that the apartment that you enter is actually the home of the woman sitting on the couch in front of you – you feel like you’re in her home looking at the paintings on the wall, the objects on her table. If you spin around to the left, you see the crew sitting in the back of the room, watching the interview. What incredible educational opportunities there could be using this technology!

How technology has made an impact

Speaking of technology, two of the speakers were founders of apps that have changed the dating world: Sean Rad, co-founder of Tinder, and David Yarus, founder of JSwipe. Both talked about how technology affects Millennials and their view of the world. Because the Millennial generation has been raised on technology, they are used to the quick access of information – and they want it to look good. If a website doesn’t work well on their phone, the site appears outdated and they will likely move on to the next site to get information. If they have questions about something, they don’t need to take a class – they can search Google for an answer. It’s not they don’t want to  be connected to the Jewish community, both Rad and Yarus said, but they want to do it on their terms and they want it to be relevant and meaningful. Their customized view of life – such as listening to songs they want when they want or watching shows when they want – also affects their giving style – they want their money to make a direct impact and they want to know exactly where it’s going.

As I mentioned in the Jewish News article, many of the sessions talked about how to reach out to the diverse populations that exist in today’s Jewish community. This went beyond the Reform-Conservative-Orthodox-Reconstructionist-Jewish Renewal-Humanist discussion that may have been addressed in previous years. Diversity goes beyond movements, but includes lifestyles that likely wouldn’t have been discussed a century ago, like interfaith or LGBTQ relationships or unaffiliated Jews. There were sessions about how to reach these communities and profiled some of the programs in place, such as JewBelong.com, which aims to rebrand Judaism, and Lab/Shul, an experimental Jewish community in New York City that dubs itself as being “everybody friendly” and “G-d-optional.”

As with any large Jewish gathering, you’re likely to experience reminders of how small the Jewish world is. In those three days, I ran into three people who used to live in Phoenix – one who used to work at the federation back in the days when I was involved in young leadership, a member of the clergy I used to interview for stories and the former education director of my synagogue who ran the Shabbat service/potluck dinners I used to bring my kids to when they were in preschool. Other people in our delegation knew many people from summer camp, former jobs in other communities, national leadership programs, and likely many other ways. When I stopped at one exhibit to learn about Project 1460- a new JFNA campaign to help provide educational assistance for Ethiopian students in Israel, in grades 7-12 – the Ethiopian student working at the booth saw my name tag and told me that she was in Phoenix only a few days earlier. It turns out that she spoke at the school that two of my kids go to!

Another big theme was North America’s relationship with Israel. Sessions explored Israel’s place in the Jewish global identity, ranging from Zionism and progressiveness to religious pluralism in Israel. Israeli President Reuven Rivlin gave his first public talk to North American Jewry outside of Israel, as well, which was pretty incredible. Members of the press were invited to attend a press conference in advance of Rivlin’s talk, held in a corner of the exhibit hallway with a nice view of the sunset.

In his speech, Rivlin called Israel the most daring enterprise in the history of the Jewish People, noting that the Jews of the Diaspora, especially in North America, are full partners, not only in the establishment of Israel, but also in its development. He talked about what he calls the four “tribes” of Israel – secular Jews, national religious Jews, Haredim and Arabs. He noted that these sectors study in separate education systems, live in separate towns, have different media and have different ideas about Israel and its values. He said that the challenge of creating a partnership between the four tribes is one of the most significant challenges that the State of Israel faces today. And that in order to meet this challenge, Israel needs a partnership with the fifth tribe – Diaspora Jews.

We are all connected

In addition to this connection between North American Jews and Israel, other ways the Jewish community is connected were highlighted, from the marking of the 30th anniversary of the Soviet Jewry Movement (Natan Sharansky, former Soviet refusenik and prisoner and currently the chairman of the executive for the Jewish Agency for Israel spoke at the closing plenary) to the acknowledgment that JFNA raised $5M to help the Jewish community of Houston after Hurricane Harvey’s devastation. The numerous organizations and programs also reminded me how many points of entry there are into Jewish life. There was the Hillel booth, a flashback to my own college days, when I was involved in the Hillel at California State University Long Beach – that participation led me to attending the General Assembly twice when I was in college, through Do the Write Thing, a program for college journalism students, which no longer exists.  In my 30s, I served on the board of the Hillel at Arizona State University. There’s the PJ Library booth, one my children would recognize, as they’ve been receiving PJ Library books since they were infants. I also learned of the new PJ Library radio, a streaming service of Jewish music. It’s free for anyone to use and even offers the opportunity for musicians to submit their music. Music is a huge part of my life and I was especially excited to hear about this new source of Jewish music.

This was my fifth GA, including the two I attended in college as a journalism student: in San Francisco in 1990 and in Baltimore in 1991. Times have changed so much since then, but I’m glad to see the passion so many have to strengthen Jewish community is still as strong as ever.