Rubber ducky, you’re the one

When I heard that today is National Rubber Ducky Day, the first thing that came to mind was this song from “Sesame Street,” which reached number 16 on Billboard’s Hot 100 Singles Chart in 1970 and was nominated for a Grammy Award for Best Recording for Children.

The second thing I thought of was our oldest son’s first birthday, which had a rubber duck theme – one of his first words was “Duck!” 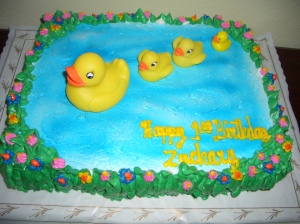 Another connection between these two things is that the “Sesame Street” song came out the year I turned 1 years old!

The birthday cake was from a kosher bakery here in Phoenix, Karsh’s Bakery, which unfortunately closed a few years ago. It was actually made from cupcakes: 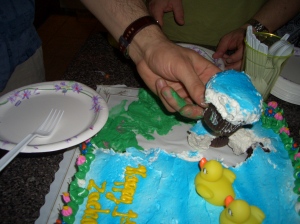 The cupcake cake was a little messy, as you can see from the frosting on the above hand, but it worked out well and it would have gotten messy whether it was cupcakes or a cake: 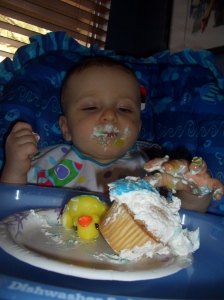 Fortunately, the birthday boy and the cake decoration could both go into the bath afterward!