E.T.: Sharing a childhood memory with my kids

A few weeks ago, I saw an article that said that “E.T. The Extra-terrestrial” was about to end its Netflix run, which reminded me that it was there and that I wanted to watch it with my kids. I don’t think I’ve seen it since my own childhood, but it was such a major movie from my youth that I wanted to share it with them. I suggested it a year or two ago and the general consensus wast that it would have been too scary for our youngest so we put it on hold.

But this time we watched it and because Feb. 13 is Extraterrestrial Culture Day, I thought I’d write about a favorite extraterrestrial cultural icon, E.T.

Usually when we watch family movies, at least one person loses interest at some point and ventures off to do something else. But not with “E.T.” We all watched it together.  It has stood the test of time.

My favorite scene from when I was a kid: 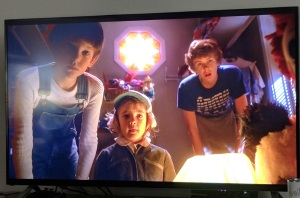 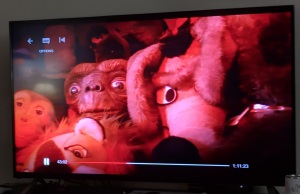 This boys also cracked up when they saw this.

Although it was the first time they watched the movie, they knew a little bit about it. In fact, a couple of years ago we visited Madame Tussauds Wax Museum in Hollywood and I got this shot of my oldest son: 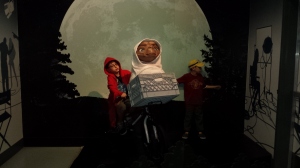 “E.T.” came out in 1982 and this is what I remembered about it all these years later: Reeses pieces, El-li-ot,” “phone home,” the scene with E.T. with all the stuffed animals in the closet and the red-hooded bike ride.

Even before they saw the movies, the kids recognized E.T. if they saw a picture from the film and somehow they also knew the “phone home” expression.

Extra-terrestrial Culture Day started in 2003 to “celebrate all past, present and future extraterrestrial visitors in ways to enhance relationships among all citizens of the cosmos, known and unknown,” according to an article on ufoholic.com.

It takes place on the second Tuesday in February and is connected to the 1947 incident in Roswell, New Mexico, when many people believed the remains of an extraterrestrial flying saucer was found.