Capturing moments before they fade away

A week has quickly passed and it’s already Friday. This week was a full one, starting with the three-day President’s Day weekend. Here’s a recap of the holidays we celebrated this week, as well as other moments from the week.

A glass of wine

Feb. 18 was National Drink Wine Day so this was a holiday only my husband and I celebrated after the kids were sleeping. It was nice to take some time to enjoy a glass of wine while lounging on the living room couch and chatting. It’s rare that we get a chance to do this because it always seems like there’s something else we need to get done, so it was a nice change.

After a brief discussion about presidents, we all decided that the best president is Abraham Lincoln. Apparently we are not alone in this idea, as The New York Times had an article this week rating all the presidents and Abe came in No. 1 on that list, too. Donald Trump came in last, but since he’s had only one year in office, it doesn’t seem fair to rate his presidency at this early stage.

In the evening, I watched David Letterman’s interview with Barack Obama on “My Next Guest Needs No Introduction,” a new Netflix show. It was a wonderful interview, and it was a little surreal watching David Letterman on TV again, as well as the former president. Both were such regular parts of different our TV viewing experiences over so many years and it was strange (though in a good way) to see them on stage together in a totally different setting (and David Letterman with a long gray beard) and in different roles than what was set in my brain.

For this Feb. 20 holiday, we returned to the kitchen for a little baking. We made Oatmeal Cherry Crumble Pie from the blog Chocolate Covered Katie: The Healthy Dessert blog. We had a frozen pie crust leftover from National Pie Day (our Pumpkin Pie) and other ingredients from past holidays and used a bag of frozen cherries since they were already pitted and it was a school night after soccer practice so we needed a quick recipe.

It was the first time I made the crumbles for the top of a pie and it was so delicious. A nice way to celebrate our oldest son’s half birthday!

Here are some photos from the evening:

Since Feb. 21, which was my second oldest son’s half-birthday, was a busy one, with both their religious school classes after school and dinner guests, we opted to buy the sticky buns, aka cinnamon bread, the day before when we were at the store getting frozen cherries. Since we planned ahead this time, we enjoyed this for breakfast. 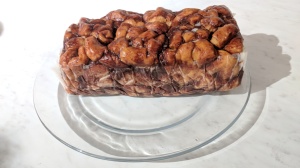 In the evening, one of my husband’s friends from high school joined us for dinner with his wife and daughter. They were in town visiting his parents and were staying at a nearby hotel. My husband and his high school friend hadn’t seen each other since high school but recently got in touch via Facebook. It was a really fun evening and their daughter, who is the same age as one of ours, had similar interests (video games, Minecraft) so they got along splendidly.  We forgot to get a photo of the evening, but I did take a photo of the table before dinner, which was set by our oldest son.

Although Feb. 22 was National Chili Day and National Cook a Sweet Potato Day, it was also STEAM Night (Science, Technology, Engineering, Art, Math) night at the younger kids’ school, so I didn’t make chili or cook a sweet potato because we had a quick meal at a Mediterranean restaurant near the school. So technically I guess we didn’t observe any national holidays.

I did consider going out for a margarita because Feb. 22 was also National Margarita Day. It would have been nice if there were margaritas served at STEAM night, but there wasn’t. We did get to see the craters on the moon through a telescope though, and that was pretty cool.

They had some fun projects, like making a harmonica with two tongue depressors, making candy and making little cars that you could race.

Today’s holiday was a fairly easy one to observe as we had some bread, so we made toast for breakfast.

And that catches us up to today.  Coming up soon is National Tortilla Chip Day and National Pistachio Day, and we have both in the pantry so we’re a step ahead.