Are these signs that I should reboot or unplug?

Although last Saturday was the National Day of Unplugging, I’d like to celebrate it tomorrow by turning off my phone and my computer and not turning on my car. Not that I have had much of a choice in the matter.

Yesterday morning as I was ready to drive my youngest son to school (Z is on spring break and J was on an overnight trip with his class), the car didn’t start. My husband was about to leave for work so we drove him to work (in the opposite direction of the school) and I had the car for the day to do pick-ups. I called AAA when I got home and found that it wasn’t the battery, but possibly the starter. 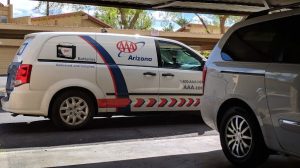 When people tried to call me on my cell phone yesterday, I’d answer the phone to silence – they couldn’t hear me and I couldn’t hear them.  Last night I was on the phone with tech support for about an hour and they completely reset my phone, which cleared all my apps and saved passwords. When I needed to use my landline today, the cordless phone was beeping because it was low on batteries.

Today, after driving my husband to work and the younger boys to school (over an hour of driving), I was working and then one of the websites I visited – a site for a TV station – the window went red with a hacker warning and I wasn’t able to close Chrome and I had to reboot. Then the computer was slow so I worked on my husband’s computer instead.

Isn’t technology supposed to help you be more productive?

On my way to pick up my husband at his office in downtown Phoenix, we were at the light on McDowell to turn left on 19th Avenue when I noticed the No Left Turn sign above the signal. It’s a three-street intersection (McDowell/19th Ave./Grand Ave.) so the wait time is triple. And there are train tracks that cross McDowell, so of course there was a train up ahead, which stopped the traffic as it passed. I realized that I’d need to pass the triple intersection and do a U-Turn ahead to go the direction I needed to on 19th Avenue.

When the light finally turned green, our lane didn’t move, although the other lanes did. I soon saw why – there was a stalled jeep in the front of our lane. I got behind him right as the light turned red so we had to sit there through another light cycle. Of course about five minutes into the first red light – as the train was inching along – my youngest started complaining that he had to go to the bathroom SOOOOO bad. “Why aren’t you moving, Mom!? Go already!”

And that was my day. (I always feel silly complaining about these sort of things because so many people are going through so many other awful things everyday, but it sure does help to write about it so thanks for humoring me and reading this.)

When all these physical signs manifest themselves, is it meant to be some kind of spiritual sign, too? Between yesterday and today I feel all these occurrences slowing down what I’m trying to accomplish. I have all these things that I want to do and feel like I’m constantly getting sidetracked by technical difficulties.  Isn’t technology supposed to make life easier and more productive?

Fortunately, there were lots of nice things that happened this week, too, so in the end everything balanced out.

March is National Music in Our Schools Month and there was a concert at Santa Monica High School on March 10 that was raising money for arts programs in the school district. I think arts in school is very important, but what drew my attention to that particular concert is that my favorite rock star was a headliner. The show was professionally recorded and posted on Facebook so I marked National Music in Our Schools Month by watching Rick Springfield perform on the school’s stage with the high school students.  Also performing that night was Terri Nunn, the leader singer of Berlin, who had been a student at the school, which I thought was cool.

March 11 was National Oatmeal Nut Waffle Day, which we sort of celebrated because Ron happened to make oatmeal waffles that morning (he used almond milk, so it can still count, right?) It was also National Worship of Tools Day and although we didn’t actually worship any tools, our 9-year-old helped my husband fix the brakes on my car.

My kids stopped taking naps many years ago, but for National Napping Day on March 12, my oldest son took one since he had spent the night before at a friend’s house and they had a late night.

For him, it really was a holiday all week since it was Spring Break so we’ll mark March 13 as our Spring Break day of celebration.

March 14 was was National Potato Chip Day and that bag of Trader Joe’s Hickory Barbecue Potato Chips sure did go fast. (Full disclosure: I opened the bag two days earlier because barbecue potato chips are one of my dietary downfalls. Shhh…)

National Shoe the World Day was March 15. According to the Soles4 Souls website, The World Bank estimates that 767 million, or 1 in 10 people around the world, live on less than $1.90 per day – 385 million are children. Many don’t have access to a sustainable job or resources to provide for themselves – such as shoes.  Here’s a little more information about the organization:

We made a donation to the organization in the memory of my mom, whose birthday was last week.

March 16 is National Artichoke Hearts Day so we’ll have some artichoke hearts with our dinner tonight.

Other highlights from this past week – we attended an event for the Phoenix Community Kollel, which was a giant trivia game. We were fortunate to be seated at a table with some trivia-savvy people and won a wi-fi camera! We had the same fortune two years ago when we won  an Amazon Echo and now Alexa is member of our family.  (I went by myself last year and we didn’t win, so my husband is my secret weapon.)

Going to the event also gave us an opportunity to see our wonderful babysitter, who we haven’t seen in about a year (we don’t go out by ourselves very often). She’s known the boys since my oldest was 2 so it was so nice to see her. (He’s now almost as tall as her.) 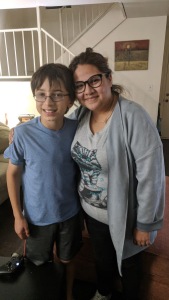 On Wednesday, my spring break son and I met one of my dad’s cousins for lunch, which was so nice. She’s a winter visitor from Minneapolis and it was so nice getting to know her better. She was going to call an Uber driver to go home, but Uber said there were no cars available so she came to our haircut appointment with us and then to pick up my younger son from school then I took her home. The boys had a little snack at her house and it was a really great afternoon.

Another example of when technology failed, but it was all for the best. (Plus, we were so lucky that the car didn’t die that day when we were out and about!)

Wednesday night was our fourth-grader’s overnight, which was a fun, new experience for him.

So all in all, despite the technical difficulties, it ended up being a great week!  (But if you want to call me and talk about it, don’t call my cell phone because I won’t be able to hear you.) 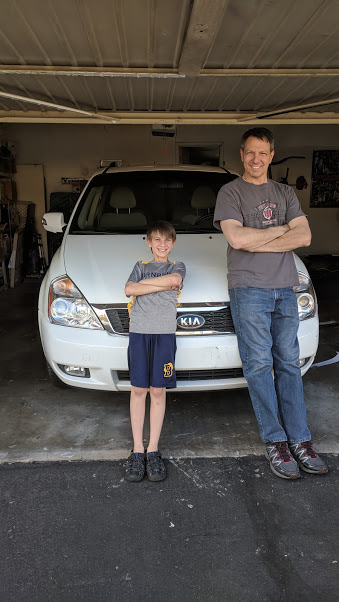