Remember the past, prepare for the future and be here now

How do you live your life? Are you able to disregard any negativity from your past to live happily in the moment? Are you always carefully planning your future and possibly missing out on what’s happening today? Are you dwelling in the past so much that you can’t enjoy today or think about the future?

Is it possible to embrace the past, live in the moment AND plan for the future, all at once?

I came across all three philosophies this week, as I celebrated Passover, meditated and listened to successful business entrepreneurs.

One of the main components of Passover is remembering the Israelites’ Exodus from Egypt. During the first two nights of the holiday, we recreate the journey at the seder by telling the story and eating symbolic foods. It is one of the most celebrated Jewish holidays around the world and it’s incredible to think about all the Jewish people around the globe celebrating together on the same evening. We remember when our people were slaves in Israel and we express our gratefulness that today we are free. We think of those who were not free in the past and who are not free today and we pray that someday everyone will be free and the world will be at peace.

Learning from the past

It’s important to reflect on the past so we can make note of our successes and failures and try not to repeat our past mistakes.

Through a business lens, it’s important to study the past to see what’s been done before so we can learn from other people’s experiences. Reading articles and books by people who have been there/done that can be very helpful when trying to plot your own path. A recent audiobook I listened to by Jeff Goins, “Real Artists Don’t Starve,” provides examples of this and I’ve read several articles by successful entrepreneurs about how to move forward in business endeavors.

There’s much written about goal setting and visualizations to imagine where you want to be in the future and bringing the powers of the universe together to make that happen. If you don’t plant the seeds today, you won’t have the plants tomorrow. How will you get where you want to go if you don’t know where you’re going?

Yet at the same time, should we spend today worrying about tomorrow? Shouldn’t we be here in the moment – in the now – because the present is all we truly have? This was a message I heard in a meditation by Deepak Chopra that I listened to this week. You shouldn’t dwell in the past because that’s over and you shouldn’t worry about the future because you don’t even know if you’ll get there. Be here now.

These thoughts are nothing new, it’s been on my mind for decades. In fact, in one of my journals from high school, circa 1986, I wrote a song about it. I think it was inspired by a George Harrison song:

It’s already happened
Don’t you worry
Why are you walking
In such a hurry
Where are you going
Do you know?
It’s not worth it
Or so I’m told

You’re just worrying
Your life away
There you go
Now what did I say?
Don’t you realize
It ends too soon
It happens so fast
It’ll happen to you

Receiving all these mixed messages this past week leaves me wondering which philosophy to follow. For now, I will continue to remember the past to appreciate all that happened to bring me to where I am today and learn from past mistakes. I will try to live in the moment and not feel burdened by any negativity from the past or worries about the future. I will attempt to set goals and take steps toward those goals with an optimistic outlook.

Which approach do you take in living your life?

Every day is a holiday

This past week, Passover dominated the holiday celebrations. We attended a seder at a friend’s house the first night, which included a 92nd birthday celebration, and hosted a seder at our home the second night. Both were lovely. For the first seder, we used the text for “The 60-Minute Seder” which was especially interesting to me both because it made for a nice seder and also because the creators of the “The 60-Minute Seder” also created the “30-Minute Seder” Hagaddah,” which I wrote about for the Jewish News more than a decade ago (“A seder in 30 minutes“).

We changed our own seder up a bit, too, finally ditching the supplement that included preschool Passover songs and instead found a Passover play online that had 13 characters, which is how many people were at our seder. The kids wrote place settings for the guests and on the inside wrote the character they would read. (In past years, the kids acted out the story of Passover, singing their preschool songs.) Now that they can all read, they all participated in the reading of the seder along with everyone else. A did a beautiful job singing the Four Questions the first night and J joined him the second night, also beautifully.

Matzah, matzah and more matzah dominated our diet this week, with lots of cream cheese, along with many fruits and vegetables. Our Chol HaMoed (weekday) dinners included orange chicken with roasted potatoes, crockpot turkey breast with sweet potatoes and salmon with baked potatoes. Pretty delicious. We also made a chocolate chunk cake from cake meal, which was a big hit (of course.) 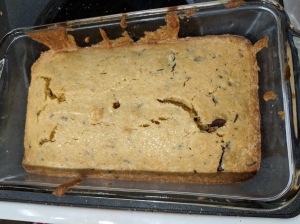 Two of the boys had spring break and so breakfast nearly every morning for them was matzah brei for one, scrambled eggs for the other. The oldest one, who had school, had lunches of matzah, almonds, carrots, celery, grapes, cuties (small oranges) and macaroons nearly everyday. Lunches at the beginning of the week included an hardboiled egg, but then they started coming home uneaten. After a whole week of standardized testing, the teacher brought ice cream floats for the class and he told her he couldn’t eat it because it was Passover. I was so proud of him for doing that and the teacher promised to bring him a special treat next week after Passover. I’m so grateful that all our kids have such supportive, caring teachers. RED for ED! (That made headlines this week – as teachers protest for better wages. I truly don’t know how teachers do what they do. They have such important jobs and I wish they could receive what they deserve.)

Besides Passover, here are the other holidays we celebrated this week:

For National Crayon Day (March 31), the kids colored placements that the author of “The 30-Minute Seder” gave me when I wrote the story about his Haggadah. Yes, I’ve had them in the house for more than a decade, usually spotting them in the middle of the holiday and planning to use them the next year. Well, this year we finally did it! (In 2007 when I wrote the article, our oldest son was 1 and the other two weren’t around yet.) But hey, Rob Kopman (author of the Haggadah), we finally used them on National Crayon Day 2018! It was a great way for the kids to spend some time before the seder and they made nice decorations.

April 1 was April Fool’s Day so there was a lot of “Hey, there’s a wasp behind you!” kind of moments. On National Walking Day (April 4), the spring break boys and I had a nice walk in the morning. Well, A and I walked and J rode his bike. It’s starting to warm up during the day – to 90 degrees already – so we took advantage of the nice morning weather before I started my work. But other than those days, celebrating Passover pretty much dominated the week.