Our last big hurrah trip for this summer before school started was driving up to Northern Arizona to visit Flagstaff and the Grand Canyon.

Originally we were going to leave the house early, drive directly to the Grand Canyon, spend a few hours there and then head to Flagstaff. But we’re not really morning people so we got a late start on Saturday then hit some traffic so we decided to go directly to Flagstaff and spend the rest of the day there and then go to the Grand Canyon the following day. It was a good choice.

After checking into the hotel, we went to our favorite Mexican restaurant in town, El Capitan, which has lots of vegetarian options. Then we went to downtown Flagstaff to watch an outdoor screening of “Harry Potter and the Sorcerer’s Stone” as part of the summer Movies on the Square. We were too late for a big Harry Potter scavenger hunt they were doing downtown, but joined some of the activities and a Harry Potter birthday celebration, which included cupcakes.

We had some time before it got dark enough to watch the movie outdoors so we went across the street from Heritage Square to have some delicious gelato at the Sweet Shoppe. There were some sprinkles (not in our gelato, but from the sky) and dark clouds in the distance so for awhile it was unclear whether the outdoor movie would happen.

After it stopped sprinkling, we set up our chairs and hoped for the best. As it got darker, the giant inflatable screen inflated before our eyes and then “Harry Potter” began.  The boys had never seen it before so it was a really fun way to introduce them to Harry Potter. (I tried the first book with Z a few years ago, but he wasn’t that into it. However all three loved the movie.) One parent fail on my part was not bringing sweatshirts for the outdoor movie.  I was still in Phoenix mode of not needing sweatshirts on July evenings since the temperature lows were in the mid-90s. However, in Flagstaff the temperature did drop a bit. But the boys still wanted to stay to watch the movie so we did.

The next morning, we had breakfast at the hotel, checked out and headed for the Grand Canyon.

When I was researching our trip, I learned that entering from the South Rim during summer months can get really crowded and take a long time to get through the entrance. So we opted for the Desert View East Entrance, which was about the same distance from Flagstaff. It turned out to be a good decision, as it was not very crowded at all.

Because our 9-year-old still qualified as a fourth-grader through the end of August, we were able to waive the entrance fee because of the National Park’s “Every Kid in a Park” program that he signed up for at the beginning of the school year. He got a special ID card and got to pass out the maps to everyone in the car.

After we took in some of the views, we climbed up the watchtower for a higher view.

The watchtower was designed by Mary Colter, who based it on the architecture of the ancestral Puebloan people of the Colorado Plateau.  As you climb up, you can visit different galleries with artwork that tells stories.

It’s such a breathtaking view. When the boys were younger, I was a little nervous to take them to the Grand Canyon because of our constant stage of being outnumbered (two adults, three kids) and standing at the edge of a giant canyon didn’t seem like a good idea. But at ages 8, 9 and 11, it felt like they were ready. I wasn’t exactly relaxed anytime we stopped at a lookout point, but I think I kept my “Be careful”s to a minimum. Maybe. 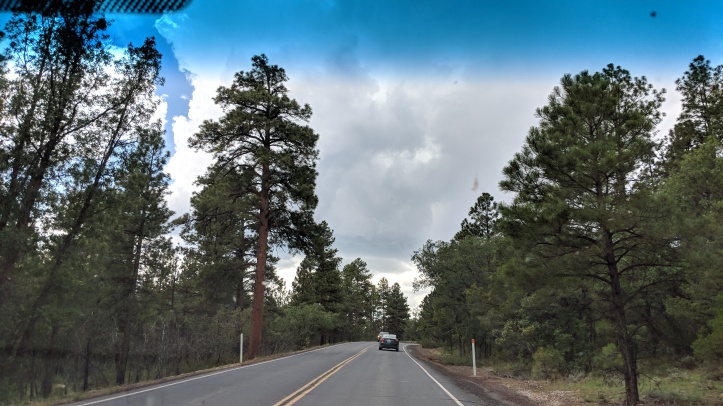 Next we took a hike and then headed home. We even saw wildlife on our way out.

It’s pretty cool to live so close to one of the seven natural wonders of the natural world!